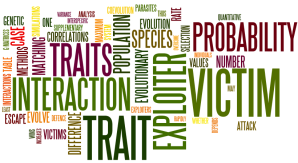 Conventional wisdom suggests that pathogens and parasites are more rapidly evolving because of various reasons such as short generation time or stronger selection. Yet somehow, they have not completely won the battle against the host. Recently, a theoretical paper on coevolution in Nature caught my eye (Gilman et al., 2012). Here the authors address this paradox: “How do victim species survive and even thrive in the face of a continuous onslaught of more rapidly evolving enemies?”

Instead of treating a coevolutionary interaction between two species as the interaction of only two traits, the authors investigate the nature of an interaction among a suite of traits in each species. It’s not hard to think of a host having a fortress of defenses against attack from a parasite with an arsenal loaded with many weapons.