This is the coolest thing on Twitter. By. Far.

Basic science =  scientific questions that are founded in understanding theory, or the natural world around us

The last few years of financial crisis have seen a rise in criticism over basic scientific research. NPR does a great job of summarizing the criticisms and explaining why seeking to understand duck genitalia is a solid biological question.

Here’s what we’ll be talking about while we’re waiting in line for a latte.

From Noah: The BBC’s new nature documentary host had an embarrassing meeting with her most famous predecessor.

From Sarah: A proposed bill of rights for science students, and terrifying news about increasing use of the strongest antibiotics as bacteria evolve to resist them.

From CJ: The NIH found some smallpox samples stashed in an old storage room. Oops? And meet the coywolf.

From Jeremy: There may be some hope that amphibians can develop immunity to the infectious fungus that’s been devastating global frog and salamander populations. And arctic shorebirds are shifting their nesting dates to accommodate warmer temperatures. 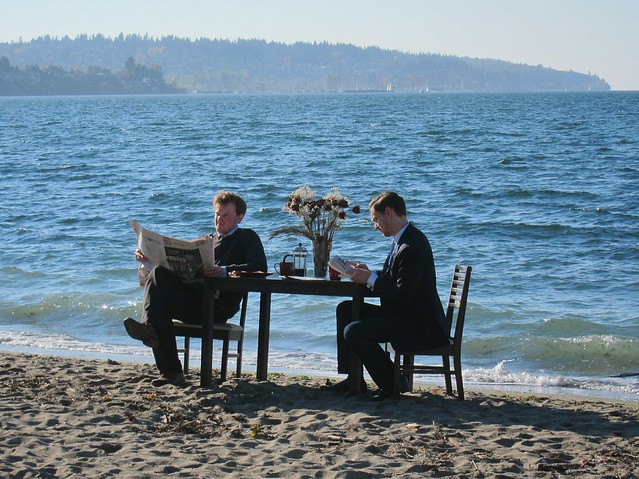 Here’s what we’ll be chatting about while we lie on the beach with a latte.

Americans who say they don’t “believe” in evolution still seem to understand it. (Jeremy)

Humans may have evolved bigger brains at the expense of muscle strength. (Jeremy)

What’s an elfie? This is an elfie. (Sarah)

Two disturbing figures from Your Wild Life – regarding trash (this pertains to you, Georgians!) and poop. (Sarah)

From CJ: On getting the most for both you and your students during summer projects.

Also from CJ: After careful consideration, Dr. Indiana Jones is rejected for tenure.

From Jeremy: Apparently, it’s not the doctors who are driving up medical costs.

Also from Jeremy: “More than 40 percent of American students who start at four-year colleges haven’t earned a degree after six years.”

From Amy: A two-parter. First, a little backstory and second, the random things that correlate: a cautionary tale.

FINALLY – AND WORTHY OF CAPS LOCK – A HUGE CONGRATULATIONS TO FORMER CONTRIBUTOR DEVIN DROWN, WHO WILL BE STARTING A TENURE-TRACK FACULTY POSITION AT THE UNIVERSITY OF ALASKA, FAIRBANKS, NEXT JANUARY. WAHOOOOOOOOOO!

From Sarah: Well – THAT is a pretty good idea.

Also from Sarah: My inner naturalist and inner molluscophobe are fighting. Nifty or icky? Both, I guess.

From Amy: “There’s little about the discovery that isn’t gross. It looks like angel hair pasta. It’s undeniably enormous. And it’s cocooned in bat poop. It’s the world’s oldest…” what? The world’s oldest WHAT?!?!?

From Jeremy: The ways in which brood parasites and their hosts are super awesome seem endless…

PS – And thanks for the double helix-icious latte art, Nicole!

From CJ – Soon we will live…FOREVER! At least if we can figure out how these jellyfish do it.

Also from Amy – “Chameleon” vine mimics whatever plant it happens to be climbing…freaky.

From Jeremy – I hope they have space orchids: NASA wants a greenhouse on Mars (and soon!).

From Sarah – Apparently, I’m not the only one who has wondered what lives in the Mariana Trench.

A rather depressing new figure that is circulating around the social media sites about the prospects for a biology PhD. (From Sarah)

The world from the fabulous point of view of the snail. (From CJ)

Whooping cranes make a nest, lay an egg in Louisiana for the first time in 70 years. This reintroduction has been extremely difficult, with locals shooting captive bred released birds repeatedly and a host of other problems. It’s obviously not out of the woods yet, but this is amazing progress! (From Noah)