I am rarely aware of what the date is. Along with struggling to remember which is “right” and “left” this is one of my most basic flaws.

So I’m almost never aware when it’s April Fool’s Day, and when I read the tweet from Richard Lenski:

I was fooled. I’ll admit it. But then I read the post, and realized, while hilarious, he was kidding.

“Pour some cold cream into a cup of hot, black coffee, and you end up with a drink that’s midway between the two ingredients in color, temperature, and flavor. A similar kind of blending can occur if members of closely related species frequently mate with each other, but many species have mechanisms to prevent such mixing.” -HHMI News

My new favorite analogy about species inbreeding, and one that every academic can relate to.

But seriously, over at Howard Hughes Medical Institute Jay Shendure and Harmit Malik (a researcher I have long admired) has come up with a clever series of experiments to find the gene responsible for keeping two fly species separate.

Read about their new technique here!

Via NPR: a paper published online this week ahead of print at PNAS reports the results of an artificial selection experiment that changed butterflies’ wings from brown to blue.

We used artificial selection on a laboratory model butterfly, [Bicyclus] anynana, to evolve violet scales from UV brown scales and compared the mechanism of violet color production with that of two other Bicyclus species, Bicyclus sambulos and Bicyclus medontias, which have evolved violet/blue scales independently via natural selection.

END_OF_DOCUMENT_TOKEN_TO_BE_REPLACED 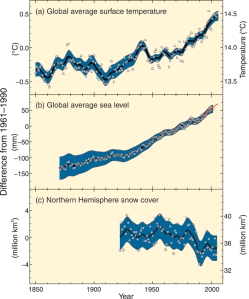 Observed environmental changes. All differences are relative to corresponding averages for the period 1961-1990. (IPCC 2007)

How will populations respond rapidly changing environmental conditions? We’ve all seen the imagery of the polar bears surrounded by thawing ice sheets, but this isn’t just a problem of the environmentally concerned. The rate of environmental change may be dramatic and making economically relevant impacts on our everyday lives. It seems obvious to scientists that global change is occurring (IPCC 2007). How do organisms respond, not just on an ecological basis, but also in an evolutionary sense? Microbe based experiments can help us understand the evolutionary processes that come into play in rapidly changing environments.

END_OF_DOCUMENT_TOKEN_TO_BE_REPLACED

This post is a guest contribution by Dr. Levi Morran, NIH postdoctoral fellow at Indiana University. Levi studies the role that both coevolutionary relationships and mating systems play in shaping evolutionary trajectories. His research using experimental coevolution to test the Red Queen hypothesis recently appeared in Science and was featured on NPR and the BBC. 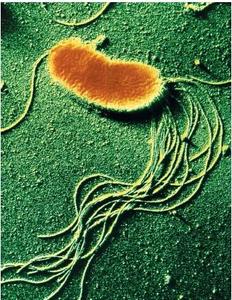 I’ll begin by acknowledging that the title of this entry is probably a bit more dramatic than it needs to be. Nonetheless it’s pretty catchy isn’t it?

Given that the human population seems to have survived that whole 2012 Mayan calendar thing without incident, I know several of my friends (I won’t name names, but you know I love you) that would immediately think about zombies upon reading this title.  However, I am not particularly concerned about the extinction of the human race at the hands of zombies. For one thing, I need more evidence (or in fact any evidence whatsoever) before I buy the whole “zombies will rise up and end us all” fear. Further, Max Brooks (son of Mel Brooks) has given us a hilarious and potentially mildly effective guide to surviving the zombie apocalypse. Ultimately I am far more concerned about bacteria. To avoid inducing mass panic, I’m not talking about a terrified level of concern here, but certainly concerned enough to give it some thought.

Why bacteria? Well, the human population is currently in an evolutionary arms race with many of the bacterial species that infect us.  We continue to hurl scores of antibiotics at bacterial infections, imposing very strong natural selection, with little regard for the evolution of antibiotic resistance in those bacterial populations. Using current strategies in medicine, we are forced to administer greater doses of drugs or develop novel antibiotics to combat infections as the bacteria evolve greater levels of resistance (Levy and Marshall 2004, Martinez et al. 2007). This is a vicious cycle. I believe it is time to develop new strategies of managing our pathogens and treating infections. Thankfully there are many people that agree and are conducting ground-breaking research in this area, like Andrew Read’s group at Penn State University.

A paper by Quan-Guo Zhang and Angus Buckling (2012) takes an experimental evolution approach to begin addressing this issue empirically. In search of a different strategy for curbing the evolution of antibiotic resistance in their experimental populations of the bacterial species Pseudomons flourences, Zhang and Buckling treated their bacterial populations with either antibiotics, a bacteriophage or “phage” (a virus that attacks bacteria), or a combination of the antibiotic and phage. Zhang and Buckling predicted that the combination treatment might be more effective than either antibiotics or phage alone because the combination treatments should better reduce bacterial population sizes and limit their response to selection (Alisky et al. 1998, Chanishvili 2001, Comeau 2007). Additionally, bacterial mutations that confer resistance to antibiotics generally do not also confer resistance to phage, so evolution of resistance to the combination treatments would likely require at least two mutations, and thus require more time to evolve resistance than the other treatments (Chanishvili 2001, Kutateladze 2010). END_OF_DOCUMENT_TOKEN_TO_BE_REPLACED

Cross-posted at Denim and Tweed.

In the course of adaptive evolution — evolutionary change via natural selection — gene variants that increase the odds of survival and reproduction become more common in a population as a whole. When we’re only talking about a single gene variant with a strong beneficial effect, that makes for a pretty simple picture: the beneficial variant becomes more and more common with each generation, until everyone in the population carries it, and it’s “fixed.” But when many genes are involved in adaptation, the picture isn’t so simple.

This is because the more genes there are contributing to a trait, the more the trait behaves like a quantitative, not a Mendelian, feature. That is, instead of being a simple question of whether or not an individual has the more useful variant, or allele, at a single gene — like a light switch turned on or off — it becomes possible to add up to the same trait value with different combinations of variants at completely different genes. As a result, advantageous alleles may never become completely fixed in the course of an adaptive evolutionary response to, say, changing environmental conditions.

That principle is uniquely well illustrated by a paper published in the most recent issue of Molecular Ecology, which pairs classic experimental evolution of the fruitfly Drosophila melanogaster with modern high-throughput sequencing to directly observe changes in gene variant frequencies during the course of adaptive evolution. It clearly demonstrates that when many genes contribute to adaptation, fixation is no longer inevitable, or even necessary.

END_OF_DOCUMENT_TOKEN_TO_BE_REPLACED

Some of the biggest questions in evolutionary biology deal with the origin of life. For example, if I go back one generation, I find my parents. Two generations, my grandparents. Ten generations are human beings who may or may not have looked like me. Five hundred thousand are, oh, I don’t know. Maybe a bipedal hominid? Anyway, if we continue going backward like this, we inevitably get to time zero and encounter some big-time questions that can really cause a brain to cramp up.

One of these major questions that can cause someone to drool on their shirt in amazement of evolution is the transition of life from unicellular, sovereign entities to cooperative multicellular organisms. A recent paper by Ratcliff et al. (2012) from the University of Minnesota posits that the first step towards multicellular organisms is cellular clustering; they then proceed to evolve clustering in unicellular yeast and ask questions about the clusters.

Step 1: Suspend unicellular yeast in solution in a test tube.

Step 3: Transfer the cells at the bottom of the tube to a new tube with fresh solution.