The tenth episode of Planet Earth brings us to the biological communities I think of as “home” — seasonal forests. I grew up in rural Pennsylvania, with second-growth deciduous woodland literally in my back yard, went to college within sight of the Appalachian Mountains, and spent my first “real” job in field ecology surveying understory plant diversity northeast of Pittsburgh. Today, I’m working on the other side of the continent, but now studying some of the most widespread tree species in forests from the Pacific Northwest to the Yukon taiga. I could almost illustrate this entire recap with images from my personal Flickr stream.

I’ll try to resist the temptation.

We start at what is, arguably, the most seasonal of forests, taiga, where the growing season may last just a month. These snow-covered woods seems marginal, but boreal forests account for one third of the trees on the planet, Sir David Attenborough tells us. The newest comprehensive assessment of tree density worldwide, published last year, found that a median hectare of boreal forest has as many, or slightly more, trees than an average hectare of tropical forest — but it also puts the boreal share of the global tree count at closer to one quarter of all trees, and finds that “tropical moist forest” accounts for a slightly larger share. 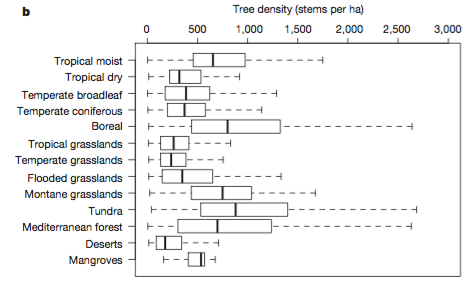 Before diving into the northern forest to meet its animal inhabitants, the aerial camera traces their footprints — a nice use of the snow cover, and clever after nine episodes of watching the same kind of predator-prey pursuits that Sir David’s narration imagines from the tracks of Arctic fox, hares, and polar bears. Then the tease is over and we’re face to face with a lynx. Moose chew through tough, poorly nutritious pine needles; crossbills lever seeds out of pine cones with their crossed bills. We spend a little time following a wolverine through the woods. “In reality, it’s a huge weasel,” says Sir David a little snidely. Finally, we visit male Capercaillies posturing over mating territories. They look like you wouldn’t want to get between them — in reality, they’re huge grouses.

You might get the impression, from the aerial footage of densely packed, snow-shrouded trees, that we’re looking at entirely untouched wilderness. The Planet Earth producers may have filmed in pristine habitat, but in fact about two-thirds of boreal forests are managed for human use, mostly growing lumber. They may also be the forests that experience the biggest temperature change over the next century of global warming. That change will dramatically change the mix of tree species that are best suited for much of the boreal region, as well as risking more frequent drought and wildfire. Given that increasing frequency and severity of forest fires is nowadays a headline result of climate change, it’s surprising that this episode doesn’t mention fire at all.

From the boreal forest, the focus moves south, to much more clement conifer forests on the Pacific coast and in the Sierras. Here we get the Big Trees — coast redwood, and the giant sequoia. Filming these colossal trees must have posed a logistical challenge, and from what I can tell it involved both helicopter shots and rigs suspended on rope to capture some amazing panning movements through the canopy. We see human tree-climbers and rope riggings in several shots, and I suspect they’re camera crew. They also provide some sense of scale for immense living structures like the “General Sherman” sequoia. Hey, I know that tree! 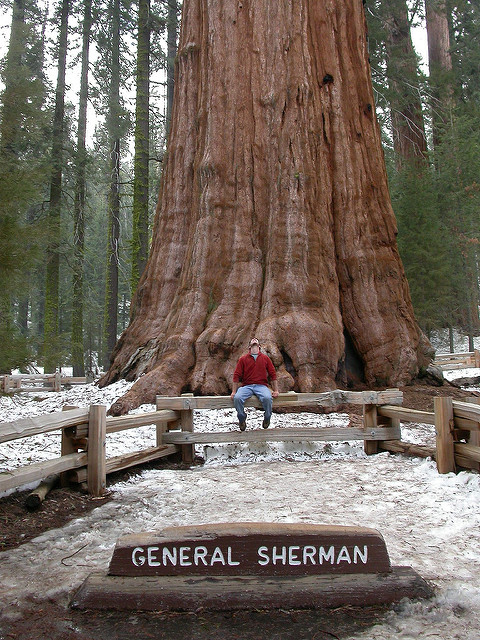 The General Sherman sequoia, one of the biggest known (Flickr: jbyoder)

Attenborough’s tone through this section frequently ascends into reverence, and anyone who’s been to these forests can understand why. A sequoia grove reveals human stature and lifespan for the tiny, fleeting things they are, forcing us into the millennium-scale perspective that cathedrals try to inspire. It is very deliberate that Sir David invokes soaring mountains to describe redwood forests (“These forests … existed before the Swiss Alps or the Rocky Mountains were even raised,”) and the birth of Jesus Christ in reference to the ancient bristlecone pines growing upslope of the sequoias.

Amongst the transcendence, there’s small, fluffy drama. A pine marten apparently leers at a pair of squirrels in flagrante, then commits the squeaky murder of a third. A great gray owl chicks tumbles through the branches, trying to take flight. The soundtrack plays a comic tango on piano; another owl chick provides goggle-eyed, head-tilting “reaction” shots.

There’s a quick hop to Chilean mountains that look strikingly like the western North American landscapes we’ve been seeing, and Attenborough’s narration points out ecological parallels between these forests and what we’ve seen before. Here, the giant trees are alerce, which don’t get as big as sequoias or redwoods, but live longer, and tower over their own mountain valleys. The name “alerce” derives from the Spanish word for larch; in reality, they’re giant cypresses. Parakeets, instead of crossbills, prise open seed cones on scale-leafed monkey-puzzle trees, instead of pines or spruce. 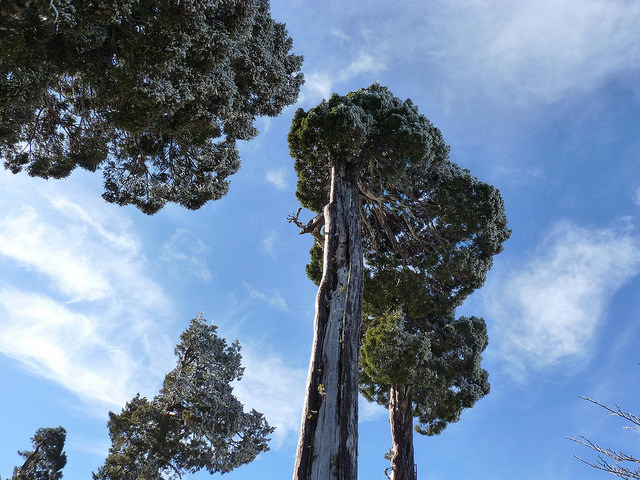 Sequoia, redwood, alerce — all of the giants we’ve seen in this section are listed as Endangered by the IUCN, their coastal and montane ranges a fraction of what they once were. Sequoias, in particular, can’t exactly migrate quickly to new, more northerly range as temperatures increase — they’re too slow-growing to respond to climate change as rapid as what humans have created. Last year, huge fires swept the part of the Sierra Mountains where most sequoias grow. Sequoias are fire-adapted, with cones that open and release seed only in response to burning heat, and the groves are already starting to re-sprout. Still, replacing a giant sequoia lost to fire takes centuries. As these and other forests face bigger and more dramatic disturbances from fire, disease, and drought, they’ll need more intensive, deliberate management to survive.

Now, it’s on to the deciduous forests of Europe and eastern North America. Dramatic time-lapse photography captures the full beauty of seasonal transitions in forests where trees shed their leaves to evade winter frosts, and replace them every spring. Spring wildflowers burst into bloom in the short window before they’re shaded over by the regrowing canopy. The timing of these seasonal changes isn’t completely fixed, and adjusting them for warmer years is one way seasonal ecosystems have been able to cope with recent decades of rapidly changing climate. However, trees in European forests seem to have compensated almost as much as they’re able, since the rate of their adjustment is decreasing — and this may be happening in other seasonal communities as well.

A balm for those grim thoughts: Somewhere in Eastern Europe, Mandarin ducklings leave their tree-cavity nest for the first time, giving us our second sequence of falling baby birds in this episode.

Over in North America, the focus shifts to a cycle much longer than the seasonal changes we’ve seen so far: the seventeen-year mating cycle of periodical cicadas. Sir David pronounces it “sih-KAH-dah” — not how we say that word on the U.S. East Coast. Whatever they are, these bugs (and they are true bugs, members of the Hemiptera) spend years underground, where they feed on sap in trees’ roots. At maturity, they emerge above-ground en masse, climbing into the trees to molt into adults with striking yellow-veined wings and red eyes. There are millions of them, and, as Attenborough notes, they’re “clumsy and very edible.” A cicada, its “expression” evoking a crosseyed stupor, topples off a branch and is apparently snapped up by a striped skunk the moment it hits the ground. Others are eaten by a laundry list of woodland wildlife: I count a snapping turtle, an American robin, an eastern chipmunk, male and female Northern cardinals, a wood thrush, a raccoon, and a gray catbird. The point illustrated is that the cicadas overwhelm potential predators with their numbers so a smaller subset can survive to mate and lay eggs. Not pictured is the carnage of flying cicadas intercepted by automobile windshields moving at highway speed, a hazard I remember well.

Finally, we come to one last major class of seasonal forests, seasonal dry forests. In tropical regions without sufficient rain to support rainforests, but enough to give forests the edge over grasslands, deciduous trees shed their leaves not to avoid frost, but because of summer drought. After visiting landscapes that are very familiar to a North American audience, the closing chapter of this episode is set in Madagascar, where the squat trunks and wide-spread branches of baobabs make for a very different skyline.

The big baobabs that dominate the images of the Malagasy forest are probably Adansonia grandidieri, but then we zero in on a freshly-opening baobab flower that looks more like A. rubrostipa to me. (The latter species is smaller, which would’ve made it easier to film animal activity around the flowers.) Adansonia rubrostipa flowers are visited by hawk moths and lemurs. Attenborough says, quite possibly following this 1995 report on observations of baobab pollination, that the moths are the primary pollinators, but these flowers don’t fit the typical pollination syndrome for moths — red color, copious nectar, and a big spray of stamens are more consistent with mammal pollination. Maybe A. rubrostipa really gets more pollination service from lemurs chasing moths through their flowers, or maybe it was once pollinated by bats, like other baobabs are.

And with the image of a lemur catching moths on a baobab flower, we conclude this episode of Planet Earth — and we’re nearly done with our tenth-anniversary retrospective on this groundbreaking series. Keep an eye out for our recap of the final episode, “Ocean Deep.”