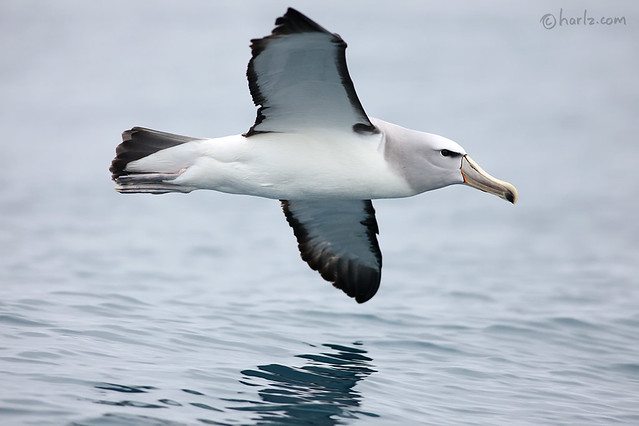 On Saturday, a Salvin’s Albatross was sighted by birdwatchers on a tour just off the coast of Northern California. This is an extremely rare occurrence. How rare? A bird-blogger who was on the tour writes:

Salvin’s Albatross are well-known for their habit of avoiding the northern hemisphere. It is so rare that I can’t really wrap my mind around it. It’s a bird I don’t look for when I am looking for rare birds. It is the rarest seabird, geographically speaking, that I have ever seen.

So, what is a Salvin’s albatross? For that matter, what are albatrosses? And what makes this such an unusual sighting?

Albatrosses are birds in the family Diomedeidae. They are large, long-lived birds that spend virtually their entire lives at sea. There are way too many cool aspects of albatross biology to cover here, but here are two to chew on:

1) They use dynamic soaring and slope soaring to travel thousands of miles with hardly a flap of their wings. In fact, they are so large, and so well adapted for gliding flight they aren’t very well equipped for typical flapping flight.

2) They have elaborate courtship rituals that play out over years, and result in life-long pair bonds. For some species, “life-long” means over 50 years. Below are Waved Albatross (Phoebastria irrorata) on the Galapagos Islands.

So what’s Salvin’s Albatross, then? Thalassarche salvini is a southern hemisphere albatross species. It’s part of a complex of four species that used to be considered one. They’ve since been split, and what’s now recognized as Salvin’s breeds primarily on two remote island complexes near New Zealand: The Bounty Islands and the Western Chain of Snares Islands, although a handful of breeding pairs have been recorded on scattered islands thousands of miles distant (but still in high latitudes of the Southern Hemisphere).

While foraging, Salvin’s Albatrosses wander the southern oceans. Their core range is from Australia to western South America, but they’ve been recorded in the southern Indian Ocean as well. The key to their rarity in northern oceans is probably lies in the trade winds. Because (as I mentioned above), albatrosses are so exquisitely adapted for gliding flight, so adept at using wind and waves to stay aloft, and not very good flapping fliers, they are also dependent on wind and waves being consistently available to get around. This means the horse latitudes, or the doldrums (bands of low wind encircling the earth at around 35 degrees latitude) probably form quite effective barriers for them.

So this individual spotted off the coast of California is a long way from home, and could probably spin an interesting yarn about just how it ended up here. How long it will stay in the northern Pacific, or if it will ever make the journey back home, we’ll probably never know.