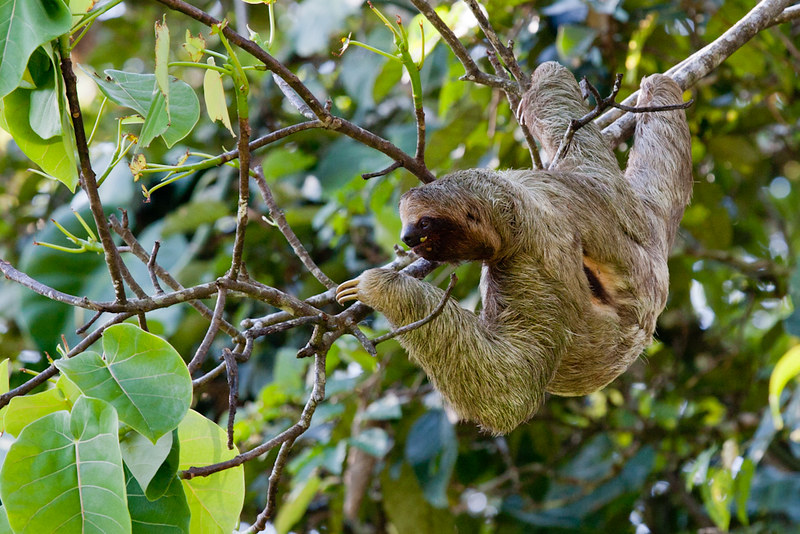 Sloths’ coarse, shaggy fur accumulates its own little microcosm of living passengers. (If you move that slowly in a tropical forest canopy, you’re going to get some hop-ons.) Among these are an assortment of algae, and moths in the genus Cryptoses. It’s been known for a long time that Cryptoses moths lay their eggs in sloth dung, and that their larvae eat it. As adults, the moths seek out a sloth, and settle into its fur to mate. Then, when their sloth takes the trip downstairs, the female moths find themselves right where they want to lay their eggs.

This is where things get interesting. The authors of the new paper, Jonathan Pauli and colleagues, posit that the sloth behavior that supports the moths is so weird and inexplicable that there must be some benefit, to the sloth, of carrying the moths around. They captured three-toed sloths (Bradypus variegates) and two-toed sloths (Choloepus hoffmanni) in Costa Rica, and from each they collected as many moths as they could, and cut off a sample of fur. They found that the two-toed sloths, which eat a more varied diet and are, relatively speaking, more mobile, carried fewer moths and less algae than the more sedentary, exclusively leaf-eating three-toed sloths. The algae in their samples of sloth fur were richer in lipids—fats—than the leaves the sloths would typically eat, and when the authors sampled the contents of the sloths’ stomachs—by, basically, sticking a tube down there—they found algae cells. Finally, sloths of both species with more moths in their fur also had more algae, and a higher concentration of nitrogen, which would (presumably) fertilize algae growth. 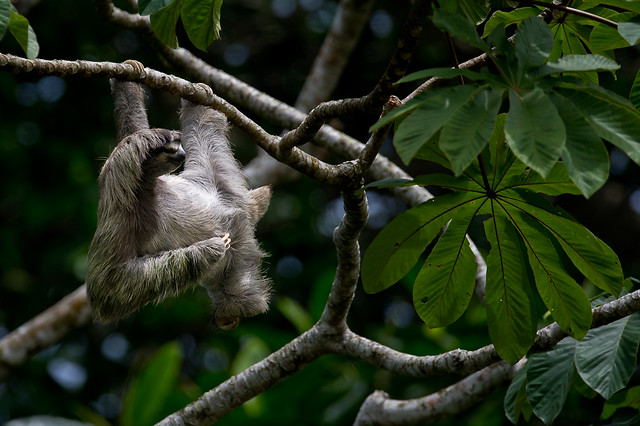 So the authors propose that sloths benefit from the moths because the moths provide a nitrogen source—possibly just by dying in the fur, or by carrying dung with them when they leave the pile of poop where they lived as larvae—for algae that act as a nutritional supplement for the sloths’ otherwise poor-quality leaf-based diet. And that nutritional supplement is worth enough to the sloths that they’ll climb down out of the trees to do their business, for the benefit of the moths. The authors note that this might explain why sloths are hard to keep in captivity, since algae isn’t available in artificial environments, and it might also clear up some difficulties folks have had in figuring out exactly how sloths get enough energy from their diet.

But this is all circumstantial evidence, at best, for an elaborate sloth-moth-algae mutualism. All that algae growth also provides some potentially useful camouflage (Pauli et al. admit this might be an additional benefit), and the fact that the less-active three-toed sloth carries more passengers may simply reflect the fact that a slower sloth provides an easier ride. Finally, if sloth grooming behavior is like that of many other mammals, it’s hardly surprising that algae growing it a sloth’s fur ends up in its stomach.

The lesson of the sloth and the moths is, then, that it’s easy to come up with a hypothesis that explains a lot of different observations—but it’s harder to demonstrate that your hypothesis is the only explanation for what you see. To actually test this just-so story, you’d probably need to fumigate some wild-living sloths, and monitor them for signs of malnutrition, or better yet reduced reproductive success. But that’s an awful lot of work, and possibly some not-very-nice treatment of sloths.

So, barring some more clever approach to the question, I think we can just add the moth-algae mutualism to the long list of (possibly) True Facts about the Sloth.

See also discussion of this paper by io9, Ed Yong, and pretty much everyone else who gets excited about weird natural history.

One comment on “How many moths must a sloth carry off for the sloth to rely on the moths?”