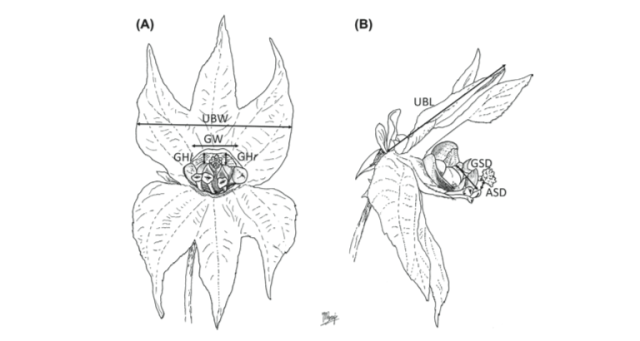 Flowers that rely on animal pollinators to remix their genetic material have evolved a tremendous diversity of strategies for attracting those pollinators—from beguiling scents to elaborate visual displays to pretending to be a lady pollinator.

But there’s a downside to making a big, showy display to attract pollinators—you might also attract visitors who have less helpful intentions than gathering up some pollen and moving on to the next flower. Showy flowers might attract animals that steal the rewards offered to pollinators—or they might attract animals that eat the flowers themselves, or the developing seeds created by pollination. So the evolution of attractive floral displays might very well be a compromise between attracting the right visitors, and attracting the wrong ones.

A recent paper in the journal OIKOS lays out this evolutionary compromise very neatly. Pérez-Barrales and colleagues examined selection on the floral displays of Dalechampia scandens, a woody perennial vine found in Central and South America.

Species in the genus Dalechampia have small, unisexual flowers—that is, each flower either produces pollen, or receives it and develops into seed-bearing fruit. Male and female flowers grow side-by-side in clusters with glands that produce resin to attract pollinating bees, and two large modified leaves, or bracts. The bracts are the showy part of a D. scandens floral display—bigger than the actual flowers, and colored white. Following pollination, the bracts close around the flowers while the fertilized female flowers begin to develop into fruit; weevils lay eggs in the developing fruits, which hatch into larvae that eat the seeds and then exit before the fruits have matured. Bigger bracts probably attract more pollinators—but do they also attract more weevils?

To answer this question, Pérez-Barrales et al. studied patches of D. scandens in the forest north of Veracruz, Mexico, taking measurements of bract and resin gland size (the measurements laid out on the first image in this post) on freshly opened flowers. In each patch, they tracked the rates of visitation by pollinating bees, and the rate of pollen deposition on female flowers—which is to say, they counted deposited pollen grains under a hand lens. That’s some dedicated pollination biology, right there.

When the flowers developed into fruit, the authors collected them and counted both the total number of seeds contained and the number of seeds showing signs of weevil damage. Dalechampia can self-fertilize, but the female flowers in each cluster typically open before the male flowers, so the authors could measure pollen deposition before self-pollination was possible—and they checked the rate of self-pollination by isolating a separate sample of floral clusters in bags, then counting the seeds produced.

All of these measurements revealed a selective compromise between attracting pollinators and avoiding seed predators. Patches where the flowers were advertised with larger bracts were more frequently visited by bees, and their female flowers received more pollen. Weevils were not more likely to visit patches of plants with larger bracts; but within each individual patch, the plants with the largest bracts lost the most seeds to weevil predation. This increased predation effect could have been due to the fact that floral clusters with larger bracts also produced more seeds—but the relationship between weevil attack and bract size was stronger than the relationship with seed production.

Across the diversity of flowering plants, the case of D. scandens is hardly unique—every plant that depends on pollination is also vulnerable to herbivores and seed predators and other natural enemies. In this one study, we’re getting a glimpse of an evolutionary balancing act that plays out in every flowerbed and every “entangled bank” on the planet.