Basically every place on our bodies is loaded with bacteria. All of these communities are important (I’ve written about some of the ways before) and more and more research seems to be finding that our microbes play an active role in fighting (or causing) disease.

So maybe it’s obvious that microbes in our swimsuit areas could be involved in sexually transmitted disease. OK, maybe not “obvious” but it may be the case with HIV and the penis microbiota. Did you know that circumcision reduces the rate of HIV transmission to men by 50 – 60%? That’s a pretty significant reduction (no pun intended). There are two major (and non-mutually exclusive) hypotheses as to how circumcision accomplishes this – morphological and bacterial. [SIDENOTE: if you are unfamiliar with the technical aspects of circumcision, I suggest Wikipedia – which has a lot of information but contains an image or two that may not be safe for work – or this Mayo Clinic site.]

Figure 1. A 2-D representation of the uncircumcised groups’ microbial communities at the start of the experiment (blue) and after 1 year (orange). Notice that blue and orange largely overlap.

The two-fold morphological argument is that the prepuce is especially full of HIV-susceptible cells and the uncircumcised sub-preputial environment is more hospitable to HIV (which can’t live outside the human body for very long) which could give the virus a little extra time to find a susceptible host cell. Removal of the foreskin eliminates both of the morphological possibilities. But wait – there’s more! It also affects the microbes.

Reporting in the open-access journal, mBio, Liu et al. (2013) attempt to elucidate the microbial dynamics of circumcision with a very simple experimental design. They begin by sampling the penile microbiota of 156 uncircumcised men. Approximately half of the men are then circumcised and all subjects are resampled after one year (presumably enough time that behavior is unaffected by the procedure).  All samples are analyzed using high-throughput sequencing of a universal bacterial marker and then the communities are from each man from the two time points are compared.  Several significant changes occurred to the microbial communities of circumcised men.

1. While all samples had similar bacterial communities at the start of the experiment, the uncircumcised mens’ microbial communities didn’t change much during the year (Figure 1), whereas the circumcised groups’ changed significantly (Figure 2). 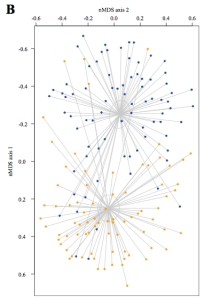 Figure 2. Same as Figure 1 except this is for the circumcised groups’ microbial communities. Notice that blue and orange are generally distinct. (Figures 1 and 2 taken directly from Liu et al. 2013.)

4. The changes in bacterial taxa significantly changed the overall structure of the microbial communities.

It seems pretty convincing that circumcision affects the penile microbiota. Does this mean that these changes are responsible for the reduction in STI transmission? Maybe. Most of the circumcised group’s microbiota responded in similar ways (Figure 2) and that may coincide with the reduction of infections. Further study is needed but the authors contend that identifying a microbial “solution” might lead to lower transmission rates of HIV in areas where circumcision is less culturally acceptable.

Now, if you’re thinking “so did the uncircumcised men acquire HIV at a higher rate than the circumcised men?” the answer is no. All subjects remained HIV-negative throughout the study. In fact, they were chosen for that reason, since contracting HIV may have an effect on the bacterial communities of interest. (This study was performed on a subset of individuals participating in a much larger study that tracks HIV transmission – you can read more about transmission rates and behavior here.)

It’s pretty interesting to me how interrelated morphology, bacteria and disease can be. With all the recent studies showing links between microbes and health (obesity research comes to mind) and the accompanying medical advancements (did you read about the poop pills?!?!?), it’s an exciting time to be a microbial ecologist and a great time to be 9 months pregnant with a son (or is that just me?).

PS –Offered without comment, an observation about human sexual behavior:  According to Table 2,  all of the men in the study were married. Around 90% of the men in both groups had a single wife. Around 85% of the men said “no” to “Nonmarital sexual relationships” and around 58% of the men claimed to have one sexual partner throughout the course of the study.

24 comments on “Bacteria, Circumcision and HIV. Oh my!”