It is that wonderful time of the year again, Valentine’s Day. A day filled with love, bitterness, or per my own Valentine’s traditions, red wine. While I can not confirm when I start drinking red wine on Valentine’s Day (earlier is better), I openly admit wine is an integral part of my holiday celebration. 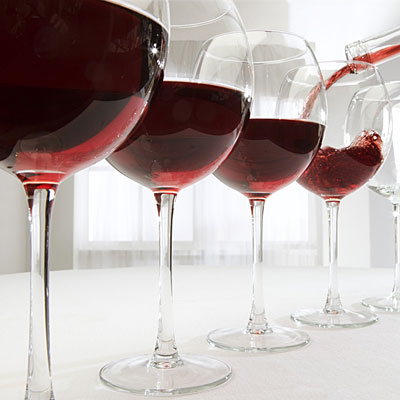 As all fellow wine enthusiasts know, wine is made when the yeast Saccharomyces cerevisiae eats up the sugars provided by grapes and leaves behind deliciously alcoholic grape juice. What I am sure most winos do not know however, is that the fermentation process is not where the biological interest ends, but rather is just the beginning.

Two factors that can contribute to how much a population is locally adapted (or how much fitness is decreased when transplanted to a new environment) are migration between populations and heterogeneity of the two environments. The first is intuitive, if you keep adding poorly adapted genotypes to the population then the popualtion will not be able to adapt to the local environment.

Now that we’ve set that up, lets talk wine. 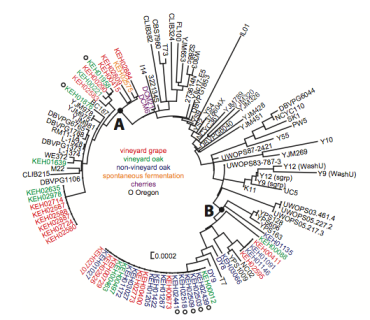 The strains isolated from various sites represented by their relatedness. Colors refer to their isolation sources, while A and B clades refer to European vs. American clades respectively

Because of its unique role in fermentation, the cause of this genetic differentiation in S. cerevisae has been difficult to determine. It could be due to migration, so strains from around the world are due to human mediated migration between vineyards while oak tree populations are not. It could also be human artificial selection, selecting for tastier strains of yeast, that caused this difference.

Hyma and Fay (2013) recently published an excellent article detailing the potential causes of gene flow in S. cerevisiae between vineyards and natural populations in North America.  To do this they used a genomics approach, sequencing strains within the vineyards, and the oak populations nearby the sampled vineyards.

So is it selection or migration that cause the differentiation of the S. cerevisae populations? Sadly it’s not that clear. 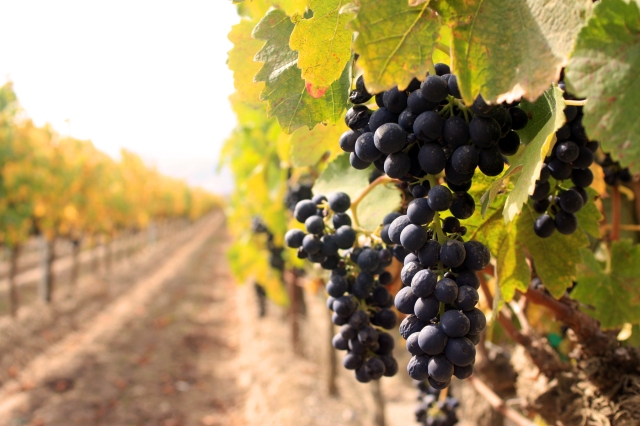 Where our lovely S. cerevisiae comes from

They found that both oak and vineyard strains persist side by side in vineyard populations, but the vineyard strains are not found in the natural oak populations. So although the two types are distinctly separated phylogentically (see Figure) they are not geographically isolated. Additionally there were no heterozygous strains that mixed the two ecotypes strains, suggesting that the oak strain and vineyard strains remain differentiated despite their close proximity.

Given that the oak tree ecotype is only found in North America and not Europe, the authors suggest that perhaps we are seeing the beginning of a admixture process that has already occurred in European populations. The authors provide two possible scenarios for the current close strain proximity without mixing, recent migration between previously diverged populations, or post zygotic barriers to gene flow that keep these two ecotypes diverged. What it does rule out is local adaptation driven by selection within the vineyard ecotype.

There is still clearly work to be done to further explain why there are distinct types of S. cerevisiae, perhaps starting with a closer look at strains within vineyards worldwide (a job I would happily volunteer for).

What does this mean about my delicious celebration of Valentine’s Day? Nothing, bottoms up :)