This post is a guest contribution by Dr. Prosanta Chakrabarty, Assistant Professor/Curator of Fishes at Louisiana State University. Prosanta studies the systematics and evolution of both marine and freshwater fishes worldwide. His research has been featured in Science, NPR and the BBC. You can follow him on Twitter.

We live in a rapidly changing world. There is a great deal of information available to us, most of it at our fingertips through computers, smartphones and the like. It is easy to think that having the internet at our reach means that we are all on an equal playing field in terms of knowledge: everything we don’t know we can find the answer to with a quick Google search. I’ve written this post because I think this view is flawed.

It may be true that we can find a great many answers on the internet, the problem is that there are many wrong answers out there as well (Fig. 1). Knowing right from wrong has never been harder. Thinking like a scientist is the best way to sort through the mess.

So how does a scientist think? As a scientist I should know better than to speak for all scientists, but I’m going to do so anyway. When presented with a problem a scientist attempts to solve it without bias. (Although we may want a certain outcome, influencing a test or experiment to get that result is not science.) One common way scientists tackle a problem is through falsification (also called the hypothetico-deductive method). Using falsification, we construct hypotheses and conduct tests that are capable, in theory, of proving those hypotheses are incorrect. (Hypotheses are essentially answers to a question.) Following those tests, the hypothesis that is not falsified lives to fight another day but we can soundly reject the one that was demonstrated false. The next time we can refine the hypotheses and make the tests stricter. Will we then find the truth? Potentially. The truth is out there but we will never know for sure if we’ve found it. Truth, is unknowable. All we have done through falsification is proven what isn’t true, or at least, what is least true. 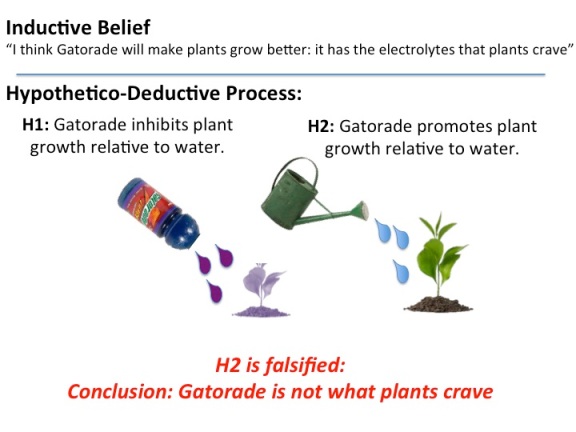 For example, if someone were to tell me, “I’m going to start giving my plants Gatorade instead of water because it has the electrolytes that plants crave,” I could test that idea by breaking it down into two opposing hypotheses. Hypothesis 1: Gatorade inhibits plant growth relative to water. Hypothesis 2: Gatorade promotes plant growth relative to water. (You might recognize this hypothesis from the movie Idiocracy; Fig. 2). Given these two alternatives I would need to make a test to attempt to prove one false. This could involve little more than growing a few plant clones in all the same conditions (light, soil type, etc.) and seeing which plants grow better if I give them either Gatorade or water. For the sake of argument let’s say the plants growing in water all do better, then we would reject H2 and H1 gets a pass. You could then go on to a stricter test of H1 trying to shoot it down by stating a new alternative H2 – A 1:10 Gatorade:Water solution promotes plant growth relative to pure water. You could go through the process of creating hypotheses, testing them, then refining the hypotheses and testing them again many, many times until ultimately you’ve run out of ideas or tests. This in a nutshell is what scientists do, and anyone can do it for any problem related to natural phenomena.

That was a very simplistic example of falsification. However, it gets tricky when you think of how many things we argue about in real life that can’t be falsified. For instance, the question, “Is God real?,” cannot be answered by a scientist. How would someone go about testing that? That question is asking about the supernatural and supernatural things cannot be explained by observations we can make in the natural world. Likewise answers that can’t be observed can’t be used to falsify hypotheses. So if I were to ask “Can evolution explain life on Earth?” I would not be able to say, “No, God created all life.” There is no way to falsify that statement but that doesn’t make it true. If the statement can’t be tested to potentially be proven false it isn’t a viable hypothesis.

One can make the inductive argument (i.e., an argument based on beliefs not drawn from falsification), “God must have created all life; it is far too complicated to be explained by evolution.” Although the first half of that statement can’t be tested, the second half can. Falsifying the second half doesn’t influence the first half. Essentially this is the argument for not teaching creationism in schools as an alternative to evolution. Only one part of the creation argument is falsifiable (“Life is too complicated to be explained by evolution.”), the other part (“God must have created all life”) cannot be tested. It is therefore not a viable scientific explanation for natural phenomena. So how do we test evolution? Scientists test it every day and it has yet to be falsified (pick up any copy of the journal Evolution; or read a post at Nothing In Biology Makes Sense!)

The next time you hear a dubious claim think of alternative hypotheses and tests to see where it gets you. It gets us scientists going all the time.

3 comments on “Thinking like a scientist: Explaining falsification and why creationism is not a viable alternative to evolution”