The hoatzin is an amazing bird. Look at it: 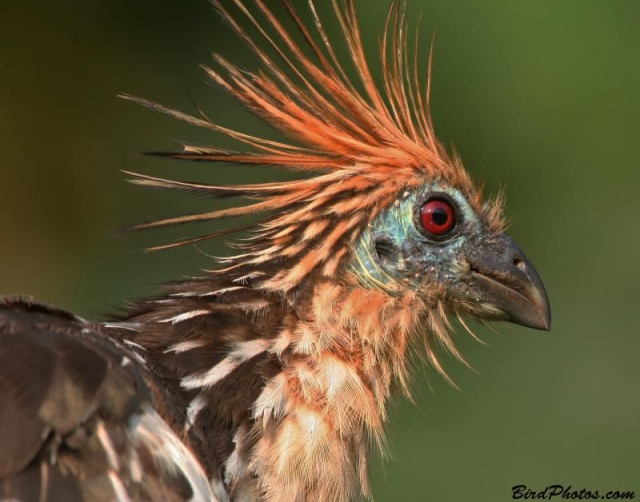 It’s awesome. The hoatzin is the only bird in the family Opisthocomidae and its taxonomic position amongst other birds is unresolved. It’s a weak flier and it smells bad (think cow manure) and both of these traits are due to the awesomest thing about the hoatzin: it’s a foregut fermenter.

The hoatzin has an enlarged crop for the purpose of fermentation (see figure below). A “crop” is an anatomical structure in throat of some animals (including most birds) that primarily stores food. In the hoatzin, however, it does much, much more. Foregut fermentation is a digestive strategy where microbes living in or before the stomach break down vegetation for their host. Microbes are required by foregut fermenters because only the microbes are capable of breaking down the cell wall of plants, a barrier that confines most of the nutrients found in plant cells. The hoatzin is the only bird to use foregut fermentation and is the smallest known foregut fermenter. It’s a weak flier because of the anatomical accommodations the enlarged crop requires. And it stinks because fermentation is an odoriferous process. (The bright side to being the Stinkbird is that the hoatzin is not eaten by humans and this probably contributes to the fact it is NOT endangered!)

Figure 1 from Godoy-Vitorino (2008); "Bacterial community in the crop of the Hoatzin, a Neotropical folivorous flying bird"

And this brings us to today’s paper. Previous work from the Dominguez-Bello research group has characterized the crop microbiota (and by that I mean, sequenced the DNA of and taxonomically identified the bacterial species present). The goal of the current study was to compare the microbiota at a population level. Godoy-Vitorino et al. (2012) sampled three birds at two populations in Venezuela roughly 500km apart (6 birds total). At each site, they performed vegetation surveys (to identify potential food sources) and recorded about 30 hours of hoatzin foraging behavior. To compare the microbial communities, Godoy-Vitorino et al. used a PhyloChip – a microarray specifically for identifying bacterial species in a complex sample.